The weather for this 8 day long journey was fantastic. Our route took us up the Tennessee River (generally heading south) to the Tennessee Tombigbee Waterway which runs along the Alabama Mississippi border. The Tenn Tom connects to the Tombigbee River which heads south along the western part of Alabama eventually reaching Mobile Bay.

We had dinner the first night with a Houston couple (boat Our Time) who we had passed earlier that day. Most Loopers choose a trawler style boat – a bit larger than ours but slower, and typically Evening Star starts out the loop segments at the back of the pack and finishes in the front. In this case everyone passed us while we were back at our respective homes.

On the morning of day 2 of the trip (Saturday) our marina host provided some delicious fresh cinnamon buns for our trip. In case you wondered, I ate them both because I decided for that day Mike had a temporary aversion to sugar (ha – Mike stole his back.  No way was he going to miss a sugar hit like that!). As this was a Saturday we had a slow go of it because we had to slow down for all the fishermen. At full tilt Evening Star, would easily swamp them. You don’t want to do that anywhere, particularly not in the Old Confederacy!

This trip in early November and mostly headed in a southerly direction so the entire day we faced into the sun. Had to be extra cautious with possible logs in our pathway. We only heard one noticeable bump.  Hope it wasn’t a fisherman……..

The Tennessee River was dammed in several locations in the thirties to create lakes for recreation, improve navigation and provide hydro power (Tennessee Valley Authority). The Tennessee Tombigbee Waterway was built in the seventies to provide another river outlet to the Gulf from the upper Midwest to compete w the Mississippi River. We passed several tows on this on this trip mostly hauling bulk material- coal, fuel etc.   As in Canada we had to pass through several locks, though these much larger than Canada, and all operated and maintained by the US Army Corps of Engineers. We both wished our dads were with us as they were both career Corps employees. 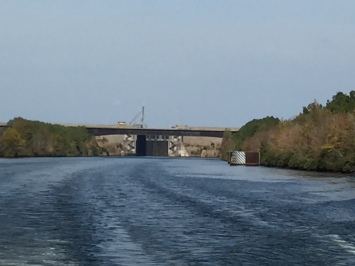 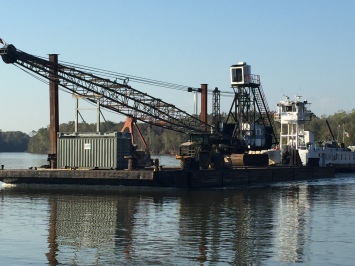 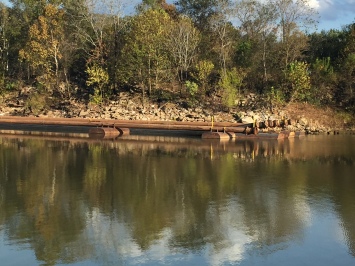 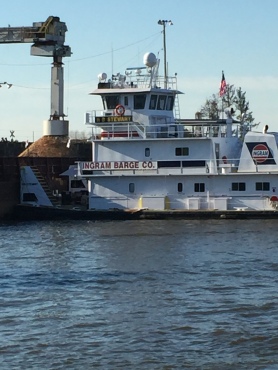 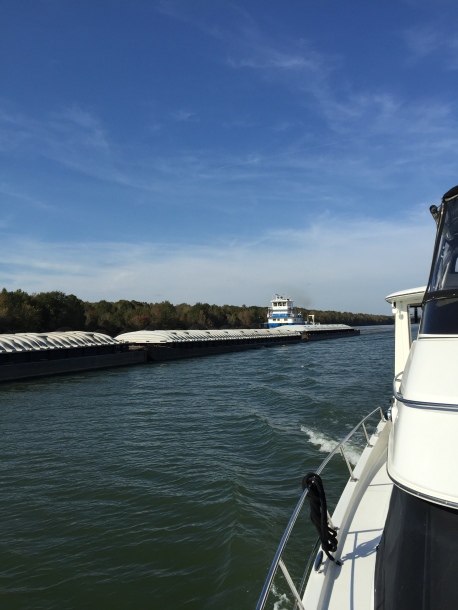 At one lock Bob had the brilliant idea of tying up to a tow mooring cell while we waited. These cells are enormous 20-foot-wide cylinders jutting out of the water with large iron rings for the tows to tie up at. Well, Bob snagged one of the rings, but helmsman Mike was struggling in the eddy current created around the cell, and Bob was hesitant to release the line – so boom – our front headlight crashed into the cell wall. B.O.A.T. (Bring Out Another Thousand!).    The light was already not working quite right, so replacement was pending anyway!

Big treat for us Sunday was a tour of Shiloh Battlefield Park with a local amateur historian and Shiloh expert. In April 1862, the Union and Confederates clashed here leaving +/- 50,000 killed and wounded. By far the most casualties up to that time in the war.  The park is largely in the same state it was back then. Though called a draw, at the end of the three days the southerners withdrew and the union held the field and were on their way to achieving the goal of capturing Corinth MS and disrupting rail supply from east to west in the south.

On Monday, we took off hoping we’d make Columbus MS but just in case we called ahead to Smithville MS to reserve a slip in a small marina near the Smithville Lock.  Well, it turns out it was very slow going due mostly to delays at locks and as daylight waned we called again to Smithville and confirmed our plans. Later that day at a lock we allowed a power boat to pass who was going full throttle and claimed to be heading all the way to Ft Lauderdale but as darkness descended we arrived at the marina with that guy taking our slip! Fortunately, there was a spot at the fuel dock.

Next Day the same guy guns out of the lock but had to wait for us at the next lock. Earlier we had decided we would pull in and stay at Columbus Marina so as we approached the lock and as we passed to port towards the marina the lockmaster sounded their normal warning horn and closed his gates. When next we saw the same boat at Mobile Bay he said he had run aground at night and had two props replaced to show for it! He blamed it on “the sun the moon and the stars” and not his rashness.

We teamed up for dinner in Columbus with four other Looper boats (3 couples and two brothers). Went to a place called Hicks using a couple of courtesy cars from the marina. Good food and lively conversation about where each had been and what they were planning. We also ran into a couple aboard Bright Angel who we had seen earlier first on the Hudson River and then in Montreal. They completed the loop in August at their home port of Grand Haven Michigan and were headed south to the Gulf and then over to New Orleans. 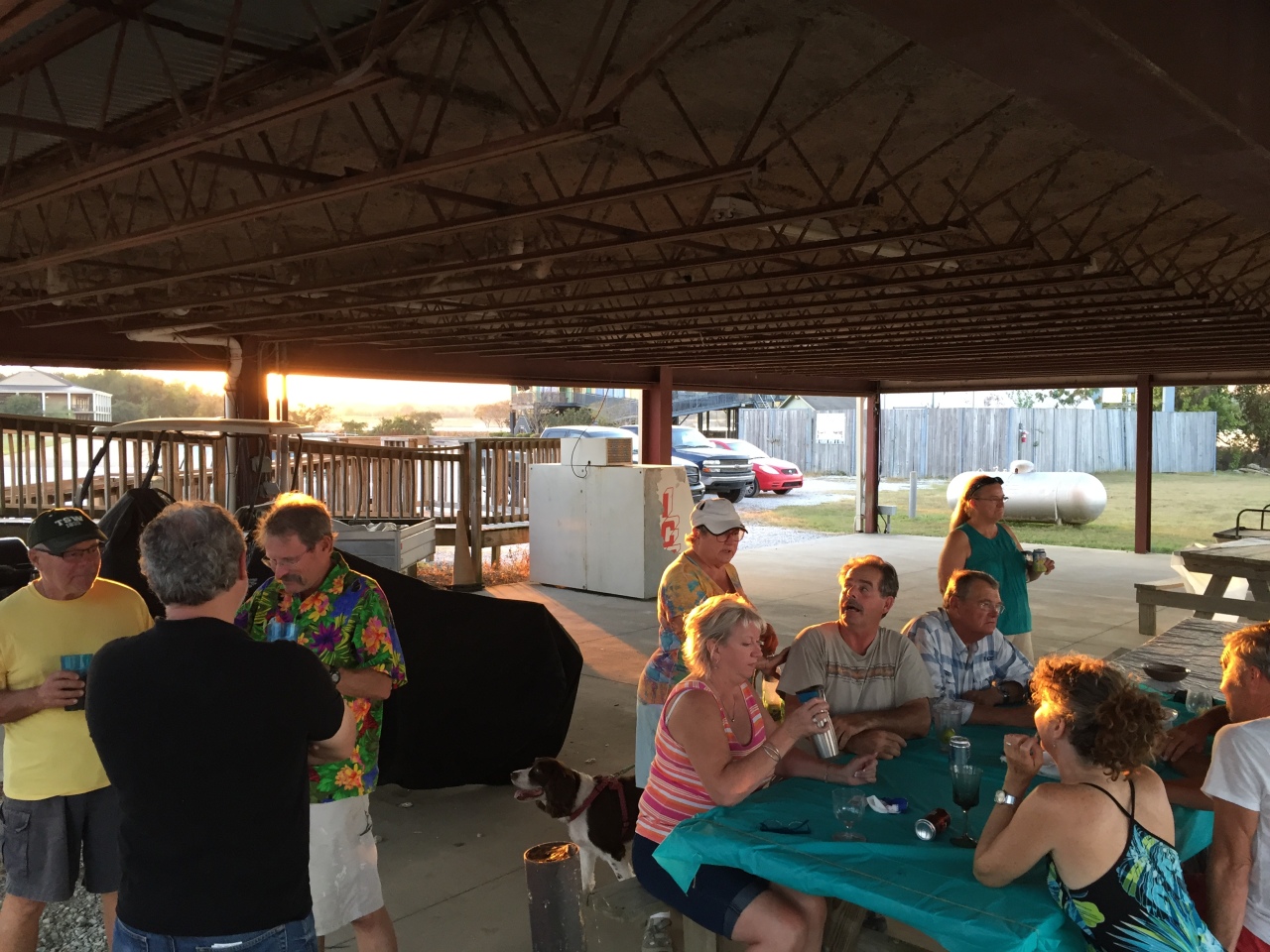 Next day down the Tombigbee River to Demopolis. The scenery was wonderful – white cliffs and forest along the banks and occasionally bald eagles hunting. We fueled up at Demopolis and ordered out pizza. Mike has the twin diesels purring like kittens – well no, roaring like lions – but at steady 22 miles per hour we get about .7 mpg.  We could theoretically make the trip on one tank of fuel, and because we were going to anchor out one night, we stopped at Bobbie’s Fish Camp for a fuel fill up.   Bobbie’s is a bit like Hoppie’s on the Mississippi, quite famous as a stop.    It has only one 150 foot dock, but boats tie up together or “raft” along the dock, and one person we met said there were 15 loopers tied up.    3 or 4 wide at the dock.     We can’t imagine doing that as it would be way to crowded for us! 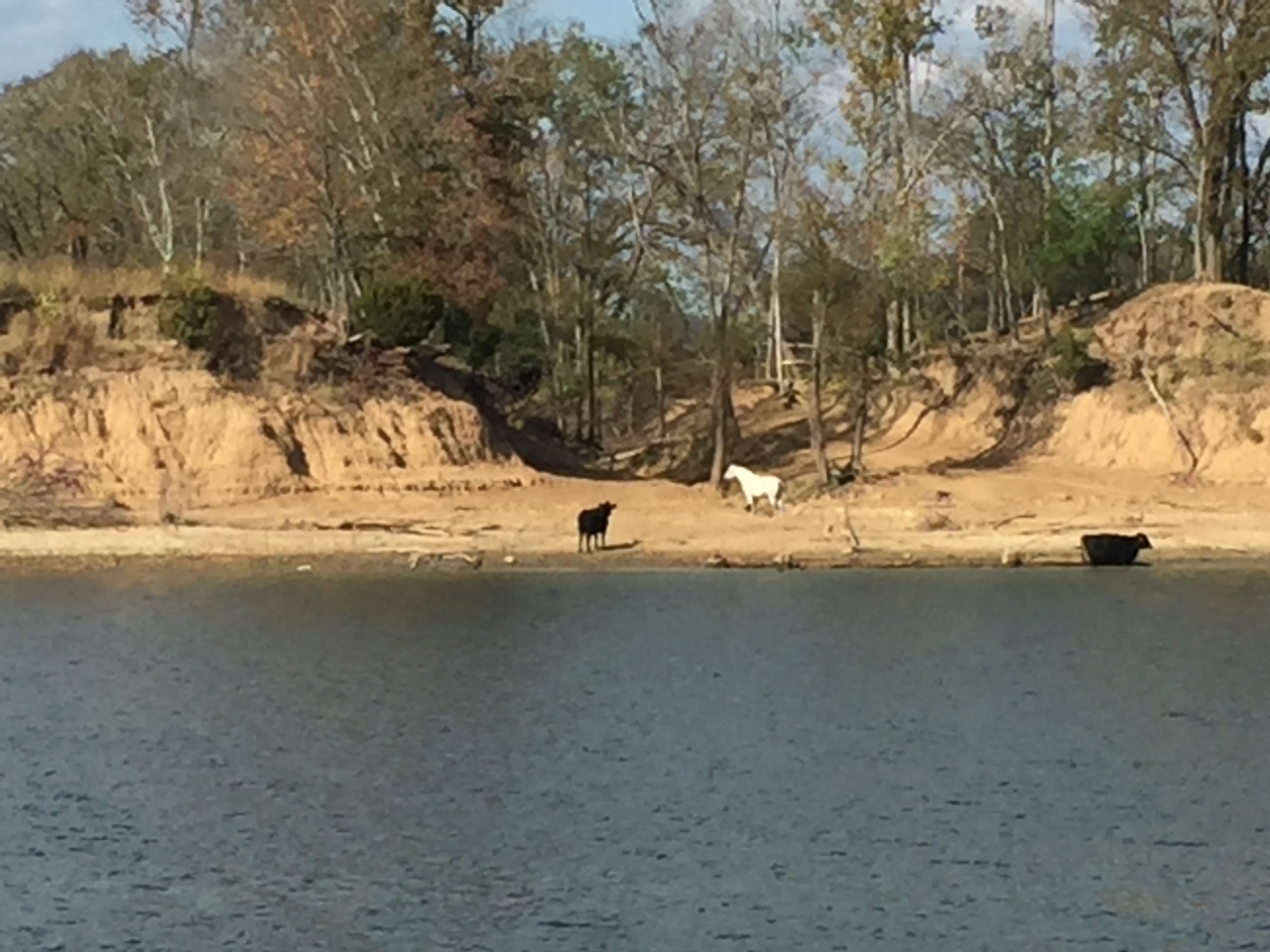 Most of that Thursday was quick except after Bobbies we once again had to wait at a lock – but that was the last lock for the rest of our Loop. Hooray!   After a couple hundred locks, we were experts at them, but also growing tied of the inherent delays going through. 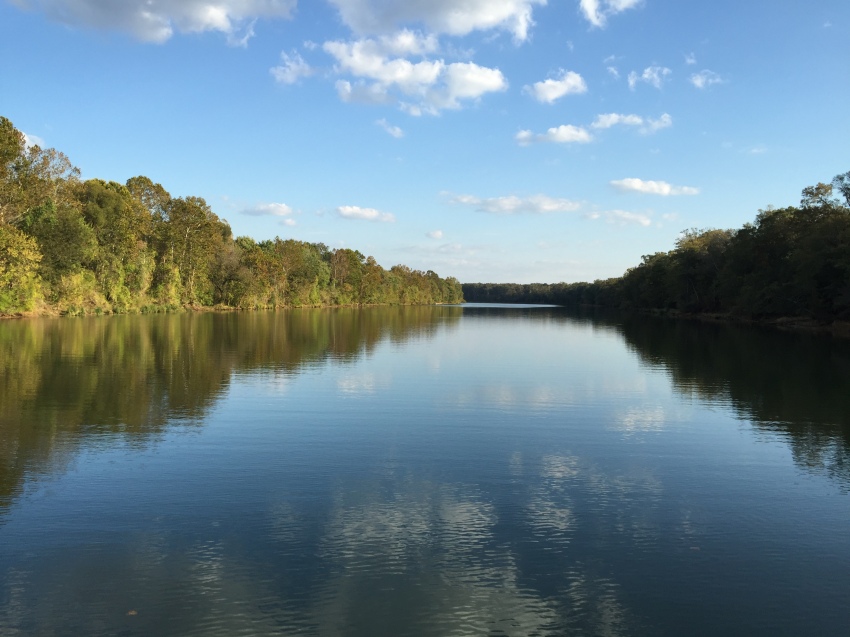 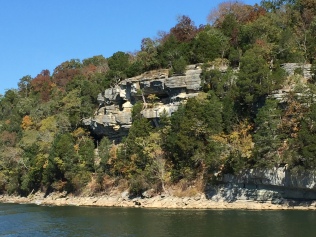 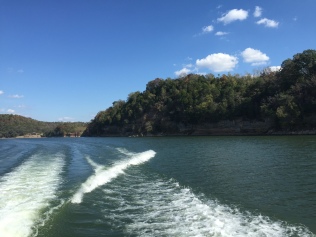 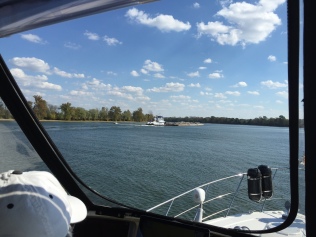 The delays meant we did not have much time to select a good anchorage but we did find one with the help of a local fisherman who popped out of a cove headed home for the night. He advised that our spot was likely a good one. We were about 65 miles north of Mobile and used a small stern anchor to supplement the main anchor. Both anchors stayed firmly in place. That night we had a couple of tows pass us with searchlights glaring, but no problems. 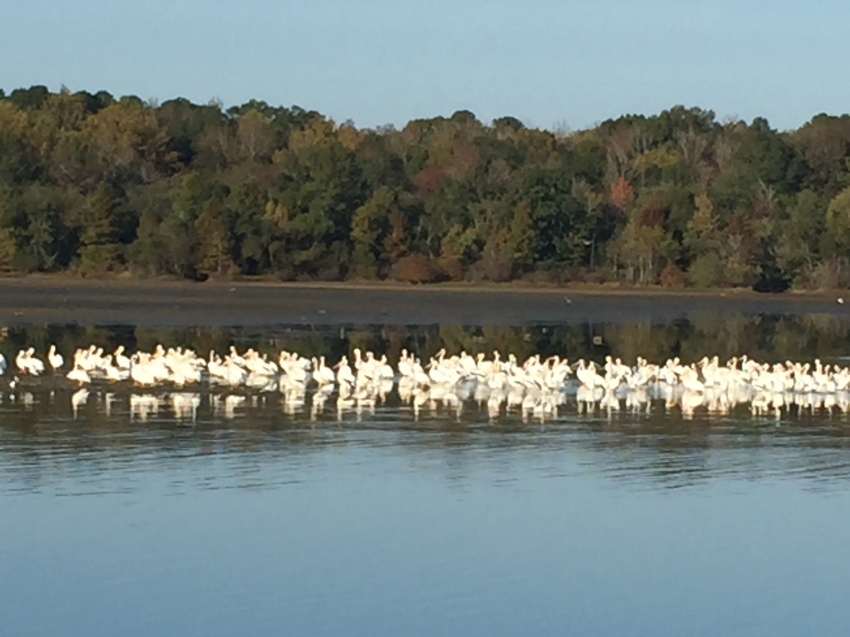 Last day into Mobile we led a fleet of about 20 looper boats into Dog River Marina on the western side of the bay. Passing through downtown Mobile on the river was cool. Austal shipyards are building several “stealth” ships for the Navy and the Alabama State Docks were busy unloading a fuselage and nose cone for the Airbus A330 NEO being assembled at Brookley field. 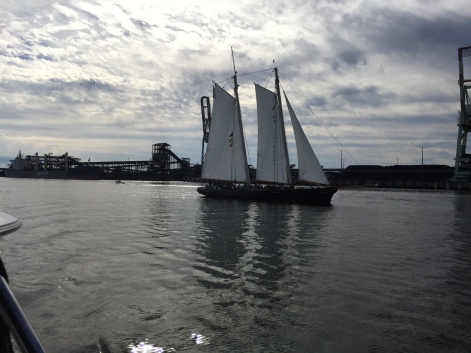 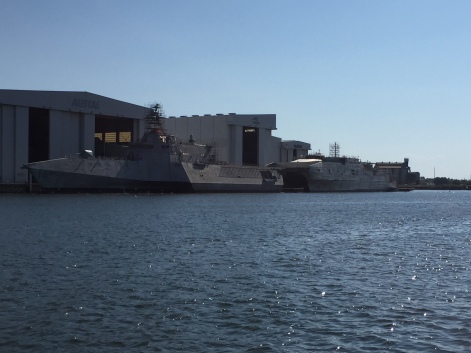 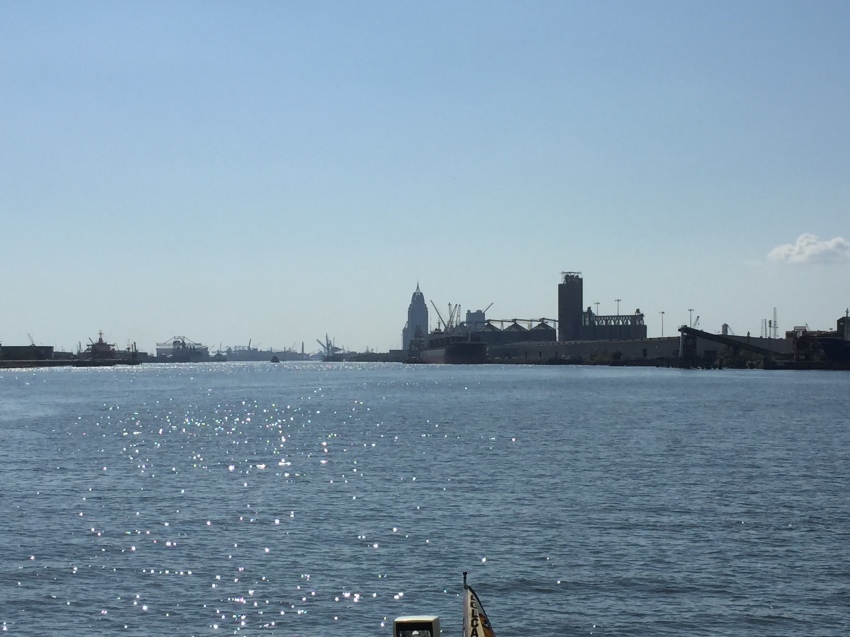 After many months Evening Star is back in salt water. Travelling down the delta north of Mobile, as we got into brackish water again, we were trailed by lots of sea gulls and the occasional pelican. Once in the bay flocks of skimmers glided over the water.

Bob’s brothers Mike and John live in Mobile and we had a great time visiting with them and family, going for a quick water trip through downtown Mobile.

Next stop – The Florida Keys!