Chicago to Land Between the Lakes, KY

By eveningstarloopOctober 5, 2016
Sept 25, 2016 – After a nice visit with Bob and Maureen Merrill in Chicago, Wayne, Bob and Mike departed Chicago on a beautiful Sunday morning and headed south to the Illinois River. We get there by taking the Chicago River through downtown Chicago. Spectacular skyscrapers line both sides of the river for the first mile or two. As well, Chicago has greatly improved the riverfront with walking trails and riverside bars and restaurants. We passed underneath the lowest bridge on the entire route – 16 feet – and just barely made it by lowering the anchor lite and vhf antenna. 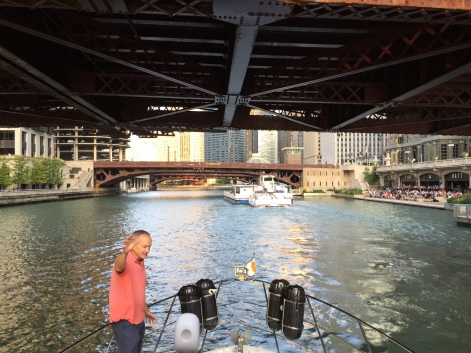 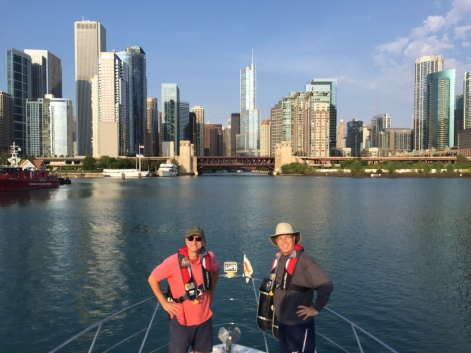 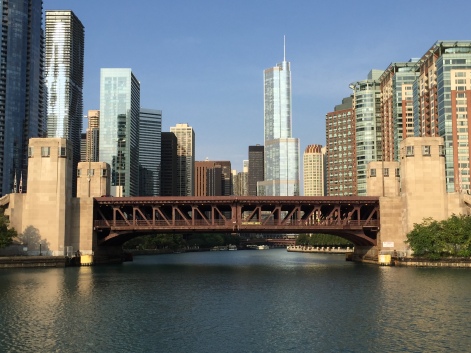 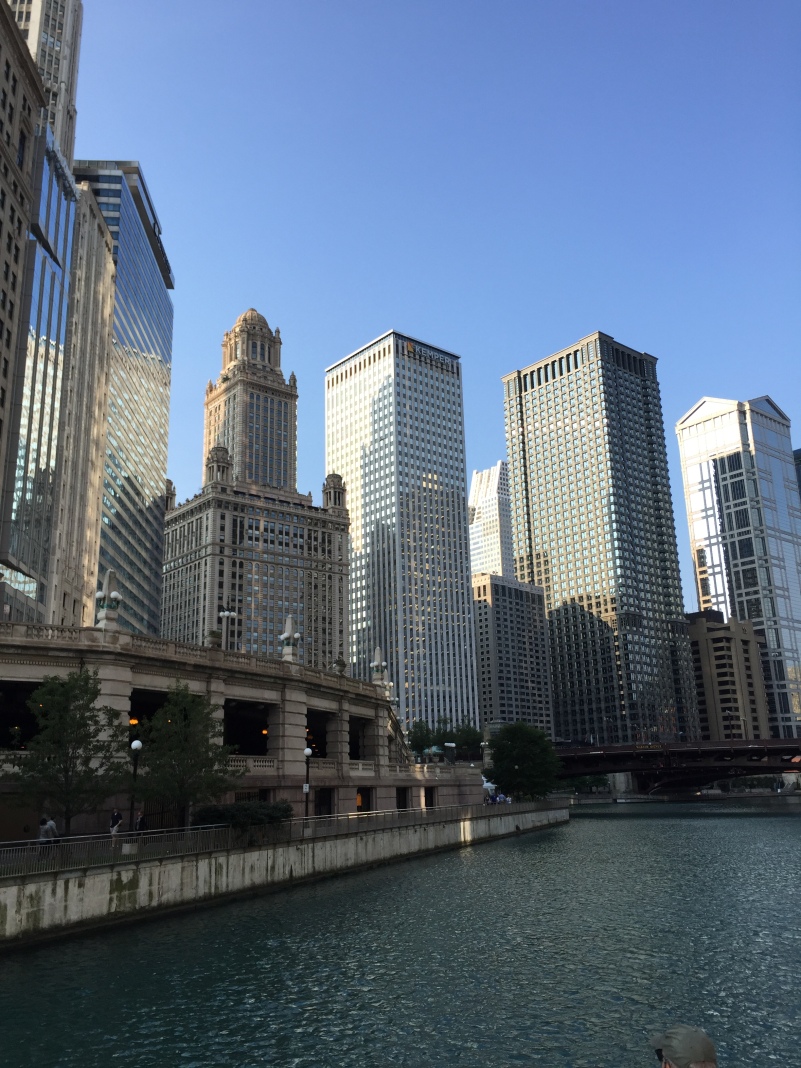 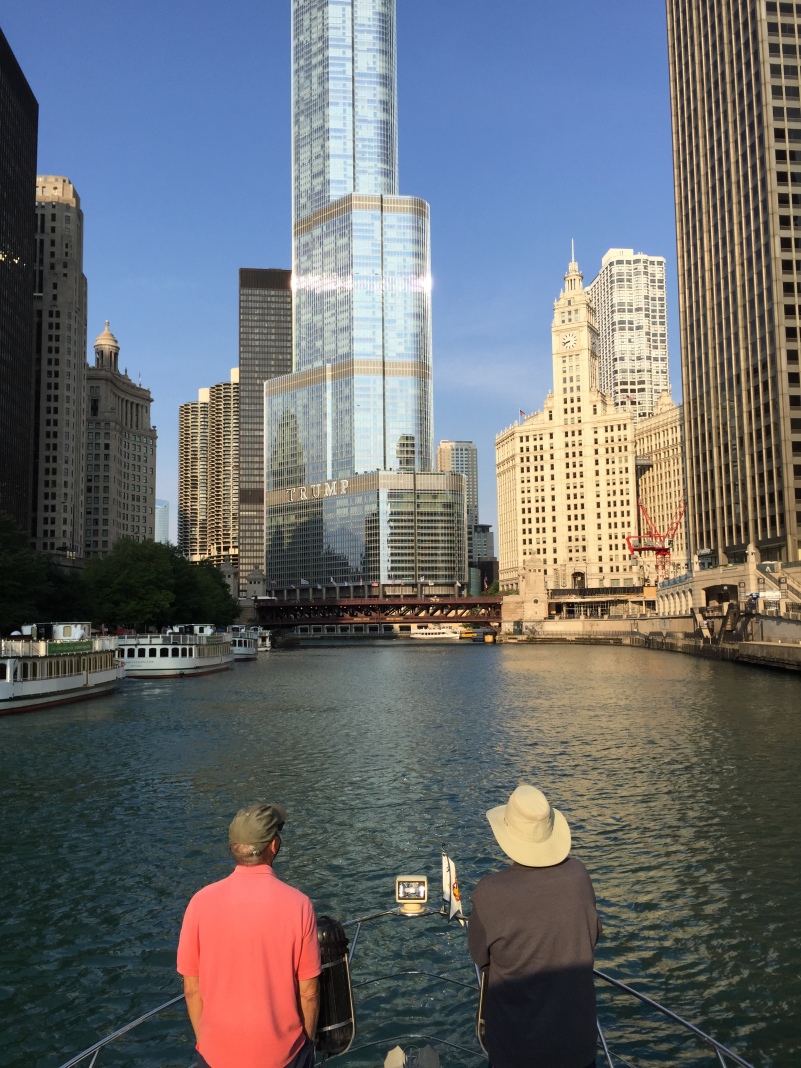 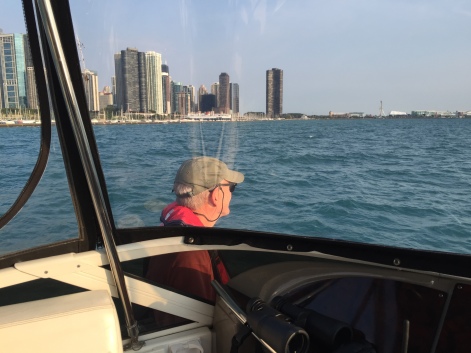 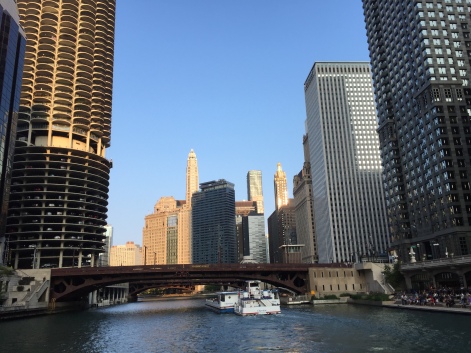 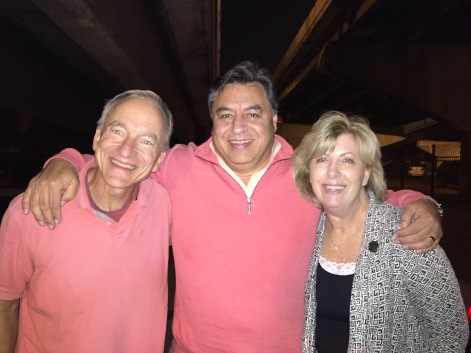 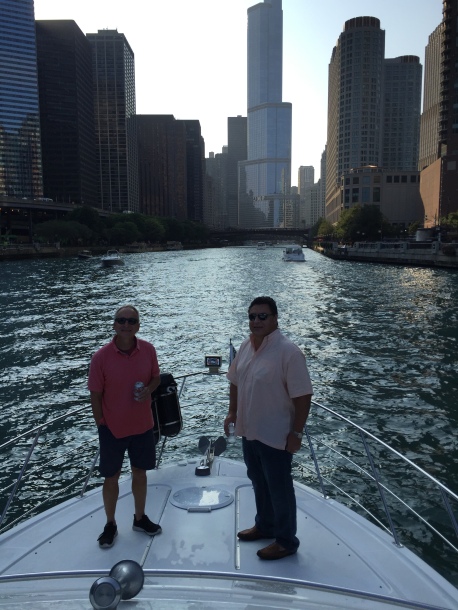 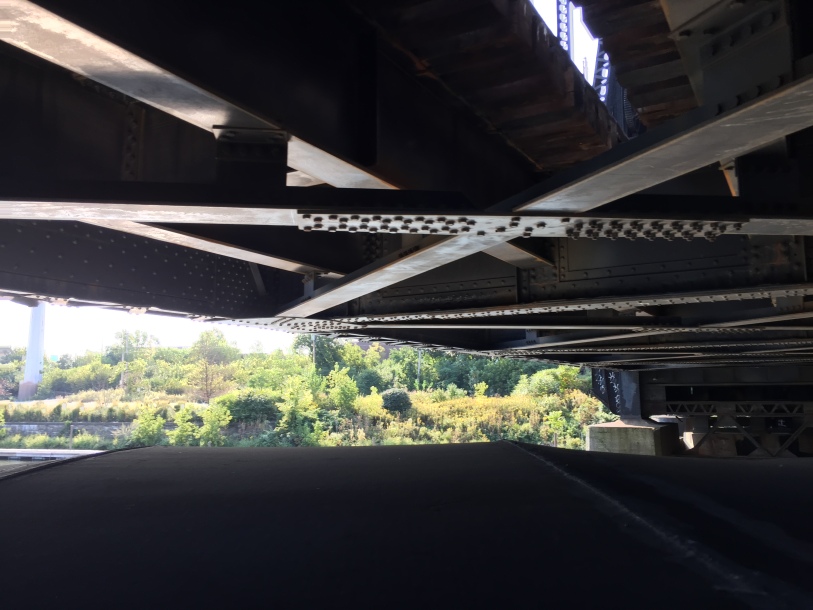 The river just outside downtown turns quite industrial. Until it was redirected the river emptied into lake Michigan, but over a century ago a lock was constructed at Lake Michigan allowing us to run south about twenty miles and connect to the Illinois River. While on the way we encountered a 500 yard stretch of water that has been electrified in an attempt to prevent an invasive species, Asian Carp, from getting into the great lakes.
The Illinois River was very scenic. It is early fall, and we were passed overhead by migratory geese heading south. As well, the area is known for it’s Bald Eagle viewing and we saw many pairs of eagles hunting along the riverside. The river has it’s share of commercial traffic – tows pushing very long barges, and every hour or so we would pass an industrial plant or power plant. All very cool from the standpoint of us engineers. On a couple of occasions w Captain Reiser at the helm we were able to deftly slip past very large tows that hog the entire channel. No small feat when the wind kicks up and the water swirls unpredictably around the tow. 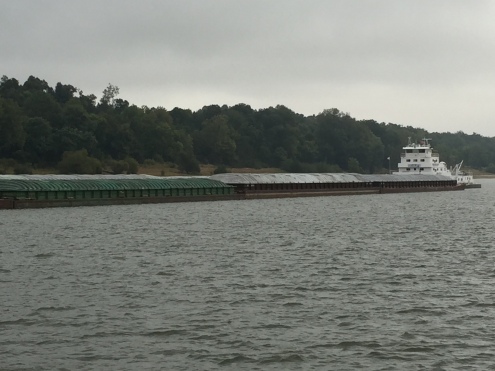 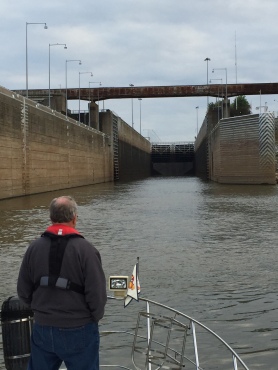 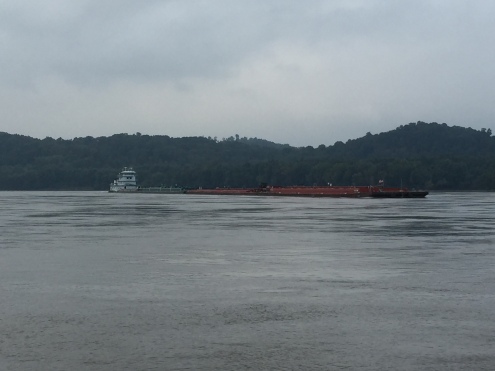 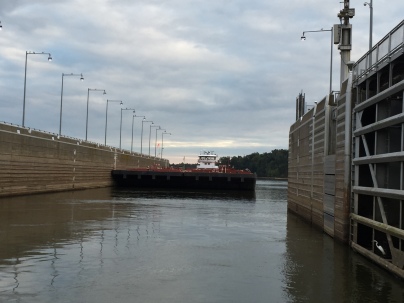 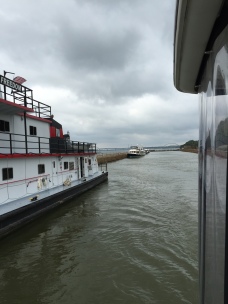 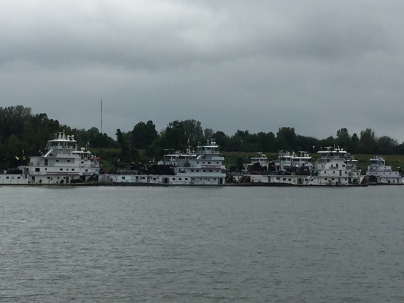 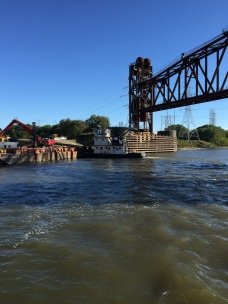 We also had a bit of a scare getting into a slip at the first marina we stopped at on the Illinois – we draw four feet and the water depth was four feet. But once again Mike nailed the landing. We also stopped for a night at Ottawa Illinois, nice marina but the town was a bit rundown at it’s waterfront. We are glad we did not stop at the city docks –  a bit deserted and clearly a spot for drug dealer connections.
Just above St Louis the Illinois joins the Mississippi at Alton where we stopped overnight. Illinois allows casino gambling provided it’s on a riverboat, so while Mike and Bob did a little engine work (that Haunted Hose repair for the seventh time!)  Wayne walked over to the casino. We used some of his winnings to pay for dinner! The next morning, with Bob mostly out of commission due to bad back Mike and Wayne had to get the boat through two large locks – which they did admirably. 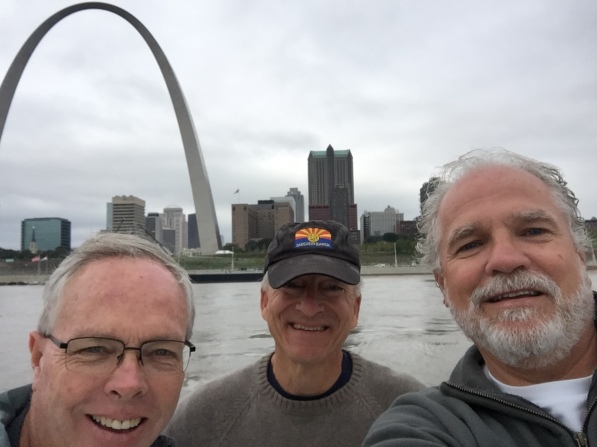 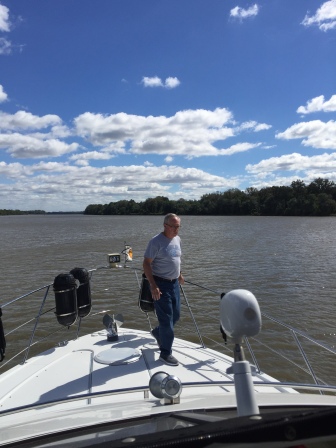 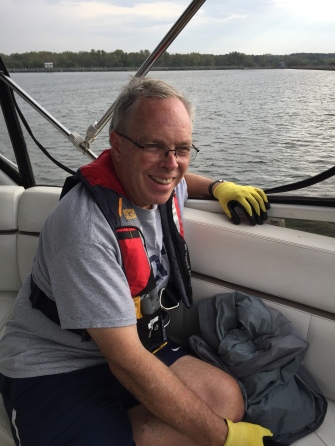 Pleasure Craft have to wait for commercial traffic at the locks and we were no exception. As well the locks are quite large – 1100 feet long and 300 feet wide and some as deep as 90 feet – so it can take as much as an hour to fill up with water (30 million gallons). And for pleasure craft – no charge, the locks are paid for by fees charged to commercial users. We did see a few pleasure craft on this trip down the rivers but almost all were fellow loopers. Loopers generally fly a pendant on the front of the boat and at marina stops we trade war stories over “docktails”. Well, more accurate to write “they” trade war stories over docktails since Mike and Bob are drinkin Coca Cola. 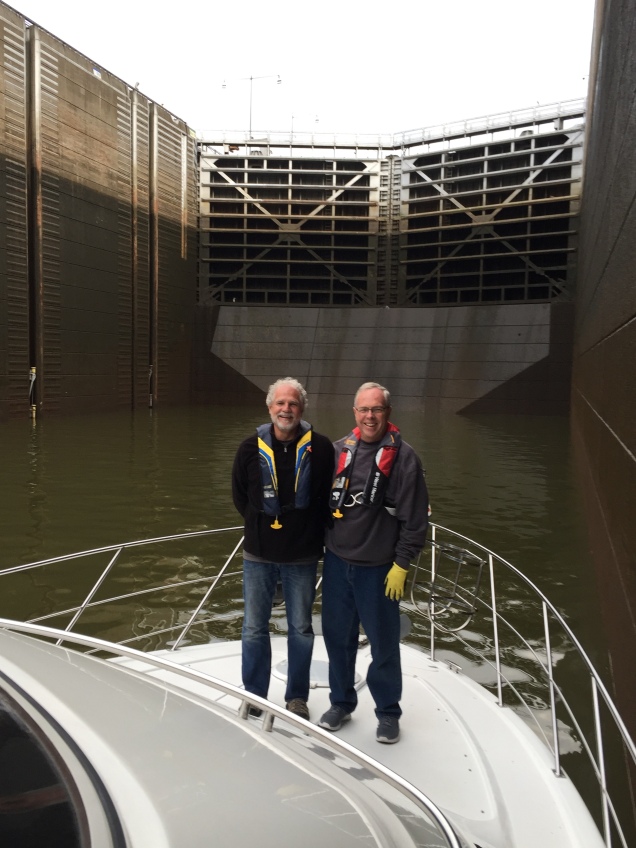 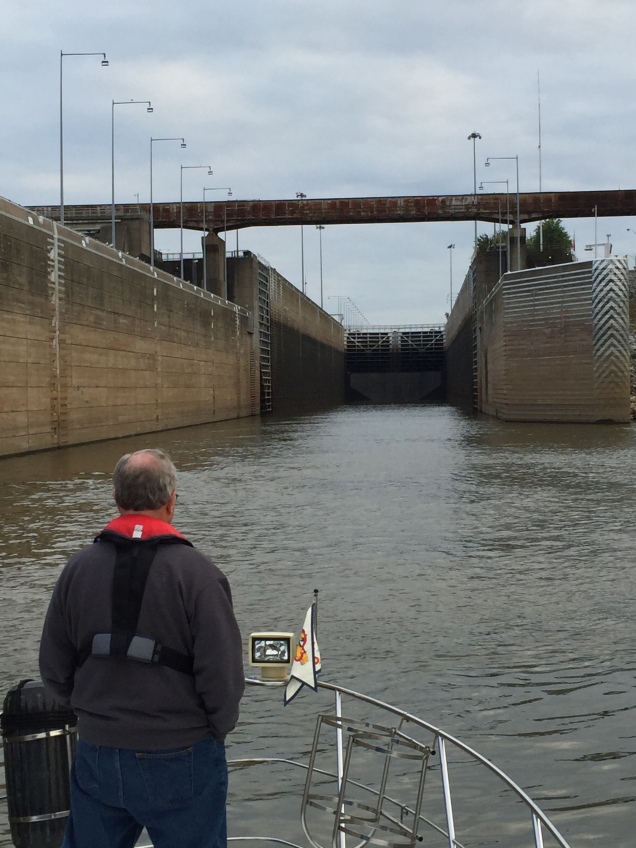 The stretch from Alton to our final stop at Barkley Lake was over 300 miles with only one or two stops to get  diesel fuel, but we had a fair following current so made good speed – 25+ mph and better fuel usage. The Mississippi is well nicknamed “The Big Muddy” because it is big and muddy. When we were 218 miles down the Mississippi we met the Ohio with Bob at the helm. He cutoff a commercial tow trying to go left up the Ohio, but no harm, no foul.
The US Army Corps of Engineers – responsible for maintaining navigation on US rivers and harbors – is building a new lock and dam at Olmstead about 20 miles up from the Mississippi. It is about ¾ done and when completed will replace Lock and Dam 53 and 52. The construction causes serious backups at times and we got caught. Had to anchor overnight which kept Mike awake trying to monitor our anchor alarm and watch out for big tows coming in late to anchor near us – to close for comfort really. 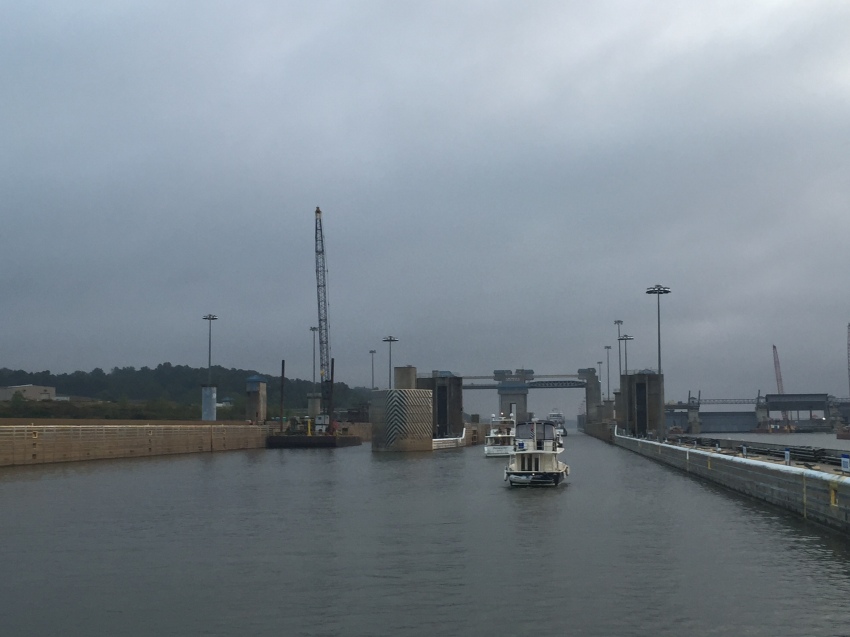 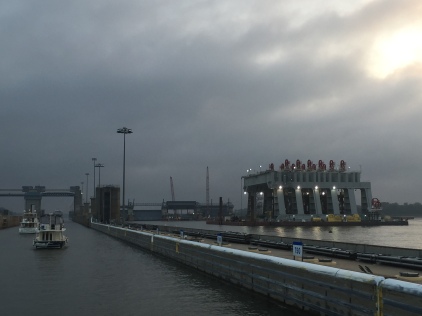 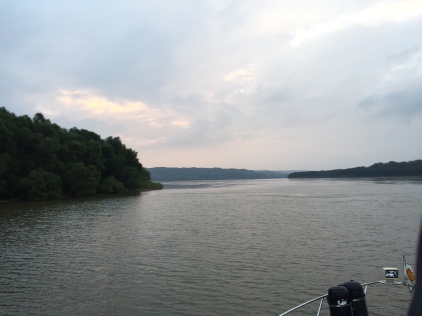 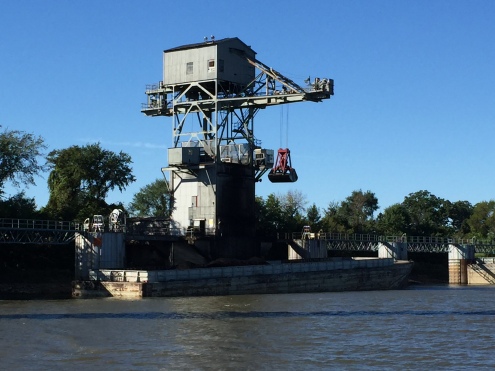 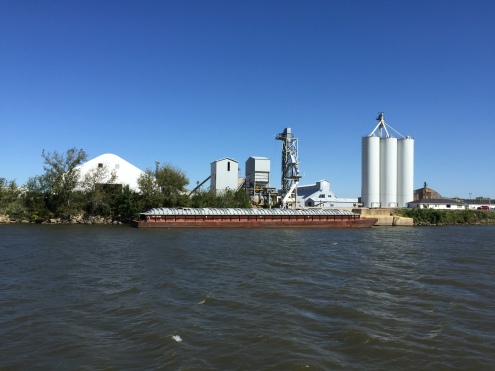 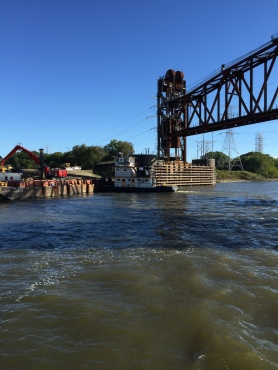 On our last day the run up the Ohio for another twenty miles and then the Cumberland and Tennessee Rivers went pretty smoothly. We got the hang of travelling past the towns and knowing where they want us to pass or how to speak their language – “pass me on the one whistle!”  and Evening Star is docked peacefully at Green Turtle Bay Marina waiting for our return for the run down the Tennessee Tombigbee Waterway to Mobile.