This one day run is 170 miles almost due southeast across the northeast corner of the Gulf of Mexico. While it does not get very deep – only about 80 feet, we will be out of site of land for many hours on the expected 10 hour journey. To make sure we would arrive in Tarpon Springs with plenty of daylight left, we left at 4:30 in the morning.   The Tarpon Springs area has a reputation for having lots of crab pots so we need daylight at the end of the voyage to be able to see and dodge them.    Crab pot ropes, floats, and the pots themselves really don’t mix well with propellers and propeller shafts!

We also purchased six 5 gallon fuel cans that gave us an extra 30 gallons of diesel on board. Evening Star would use about 300 gallons on the crossing, which would leave us only a 30 gallon reserve.   Having the extra fuel was a stress reliever just in case of headwinds or getting off track somehow!    Turns out we didn’t need them, and sure enough, had about 30 gallons left in the tanks when we arrived.

One side note – at the restaurant where we ate the night before the trip, we sat next to a table full of loopers that we had met in other locales, some as far back as Norfolk VA.    Their boats were a bit slower than ours, and were crossing later the next day to do an overnight journey.     It takes them about 2o hours to make the crossing, so they were leaving late in the day, going overnight and arriving in the morning – the same time we planned to leave Tarpon Springs headed to Tampa/St Pete.   Turns out we had to be out of our marina by 11 AM as they were going to the same marina, had reservations, and needed our spot to dock. Small world……. 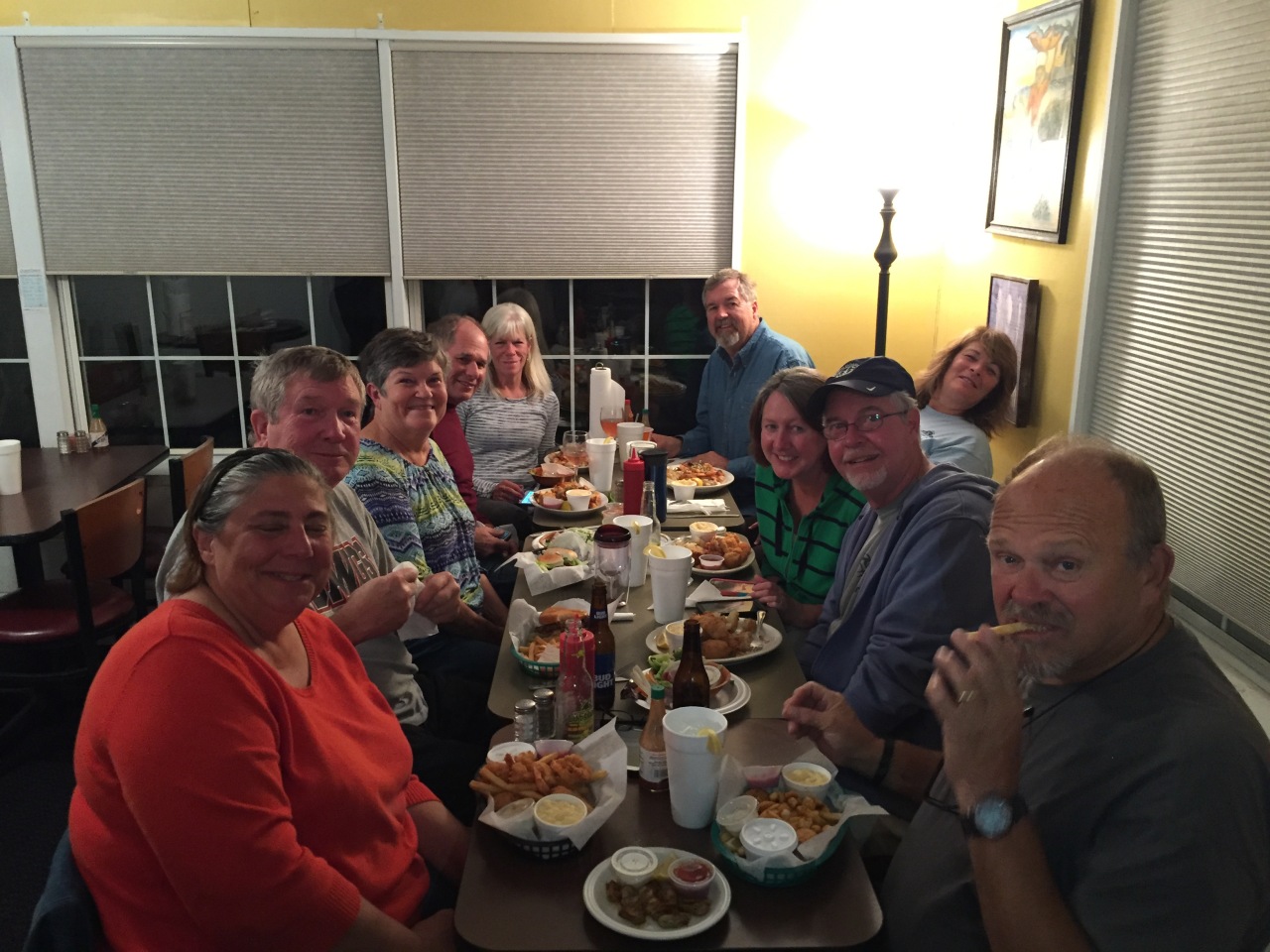 We did snag a great guest for the trip – Bob’s brother John.   An expert sailor, who has sailed hundreds of miles offshore in and around the gulf, he was a real comfort to have on board for us “Big Water” newbies.

Leaving Carrabelle, we motored relatively slowly for about two hours in darkness.   With Bob and John on the bow keeping us from hitting some immovable object, we made it out of Carrabelle and into open waters.  A full moon helped light the way when it wasn’t hidden behind the clouds, and certainly made for some great pictures. 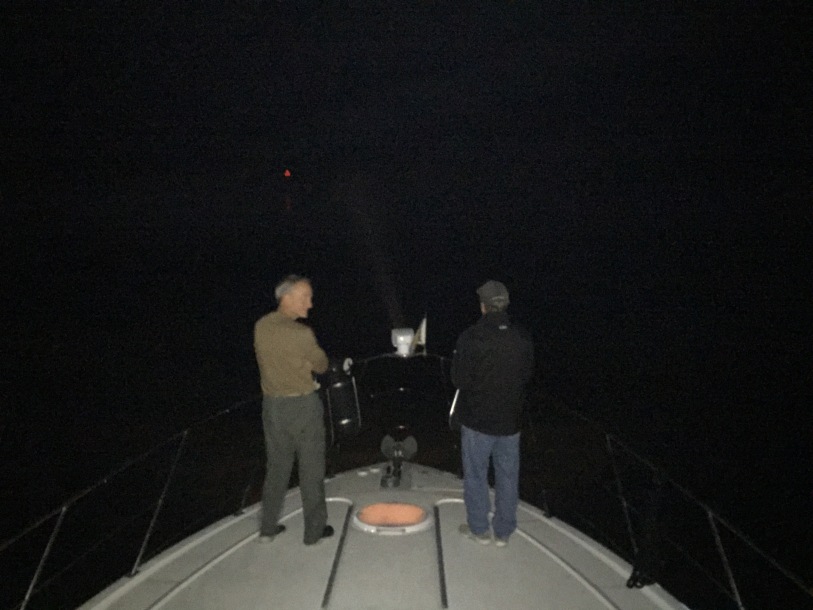 Once “out to sea” it was choppy and dolphin(!) filled for most of the trip.   That’s right, dolphins – we saw virtually no other boats on the trip. The dolphins liked to swim up and under the boat and tried to keep up with our 20 mph speed.   Bob’s brother John said the dolphins seem to enjoy the surfing possibilities provided by a boat hull moving swiftly through the water. 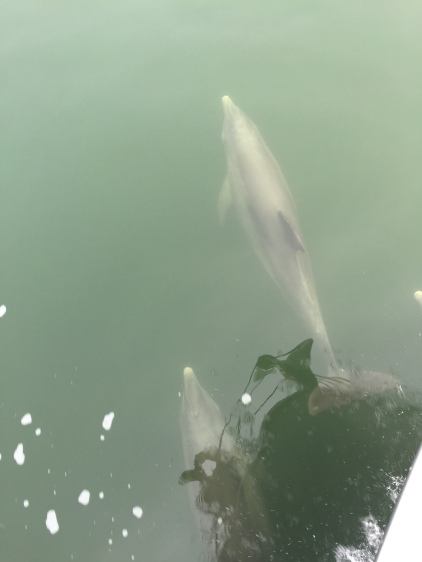 Topping off an interesting voyage, the last twenty miles into Tarpon Springs was in a dense fog (Que up Bob and John on the bow calling out buoys, boats and such since we often couldn’t see more than 50 yards around us).  With the navigation equipment we have, it is actually pretty easy to know where you are and stay on course, but it doesn’t help you see boats coming your way, and well, yes, it is nice to confirm the buoys and navigation aids are where the charts say they are! 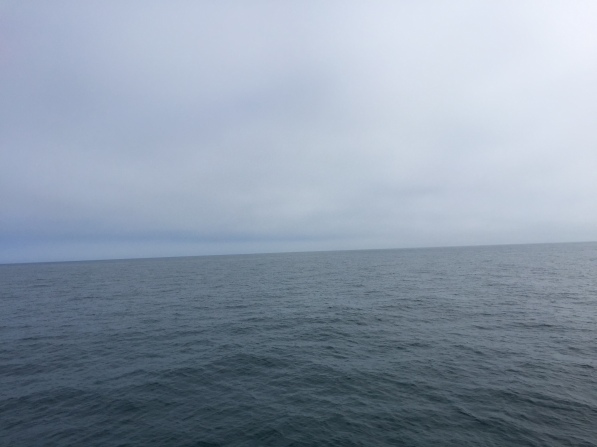 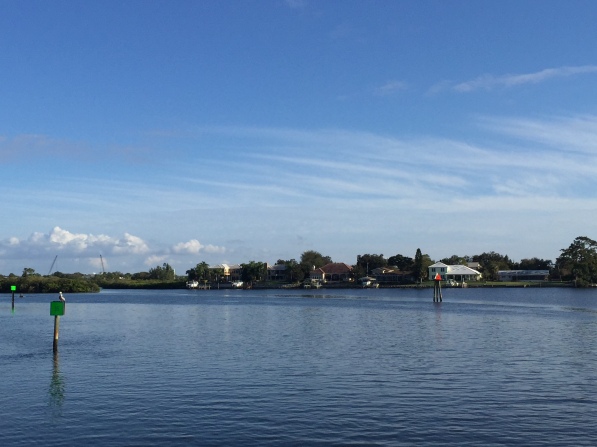 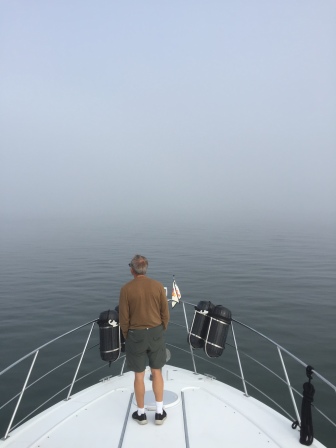 By the way, John was a great help to us – read the weather signs and kept us out of shallow water, especially as we crept through the fog into Tarpon Springs.   He also  brought along a “survival boat in a box” – a 90lb, three ft cube, which when thrown overboard, explodes into a life raft. We didn’t need to test it out – thank goodness, but safety is always a top priority. It is now well on its way back to Mobile, un-opened and ready for the next user.

All in all it was a good day. When we set out we expected calm seas and at least the last third were such.  But going through the narrow spit outside Carrabelle was quite bumpy, and especially nerve wracking in the dark. The searchlight on our prow earned its pay that morning!  The ‘go slow Loopers” who stayed behind in Carrabelle for one more day will find smoother water for their trip but the fog will certainly be a problem.  It maybe for us as well as we head down the west coast of Florida to Marathon Key.

P.S. – the next day, as we left the channel from Tarpon Springs headed to Tampa/St Pete, sure enough, off in the distance were the other looper boats that left behind us and were making their way to the marina slip we had just vacated………