Well, we planned a long 180 mile, one day trip down the eastern shore of Lake Michigan to Grand Haven. We didn’t quite make it…more on that later.
Had to start early and weather was not good. Heavy rains all around us but we only had a drizzle and pulled out of our slip to make a 0730 bridge opening. As we waited on the bridge we pulled out some duct tape and covered a few spots on the outside of the bridge that we suspect were causing sometime wet carpet in the forward stateroom. We’ll get the proper weatherstripping installed later but in the meanwhile the duct tape will do admirably.

Other than a few early morning fishermen, we had the lake to ourselves. The grey sky and grey shaded water along with a mist on our isinglass made visibility poor, but the rain held off and fortunately the sea was only about 1.5 feet and was a trailing sea pushing us along. It appeared the weather gods were with us. 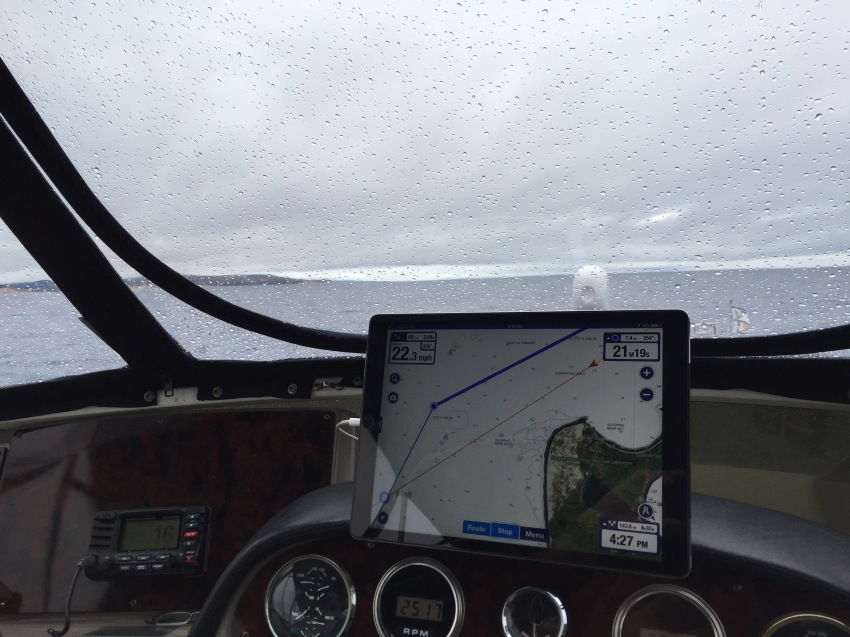 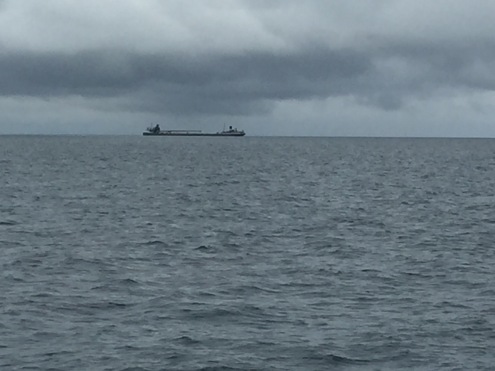 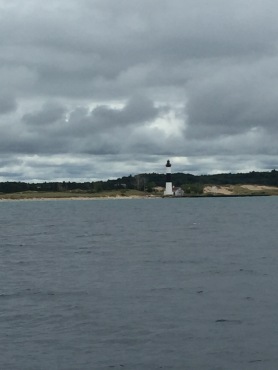 Almost immediately after we started our depth finder failed. We used our fish finder as a back up and mike went right to work underneath the helm checking the wiring. Unfortunately as I write this we still have no depth finder. Were able to get it working briefly but alas…..While in lake Michigan the fish finder will do nicely as a backup – water depths here are mostly 100 feet plus. Once we start south on the rivers though we’ll have to have it in good working order.

As the morning wore on we still were surrounded by rain, but we motored along nicely at about 22 mph and called ahead to Grand Haven to reserve a slip. We were delayed by a brief stop to tighten some clamps around a stubbornly leaking exhaust hose but by mid afternoon were looking forward to completing our longest one day run.

That following sea at 1.5 feet started getting a little worse as the day wore on. By 1600 it was 3 feet or more, and the boat started rolling a bit. Still, we were getting close so we sailed on. One of the rolls caused us to take on some water into the galley floor – a mess but not a real problem, but the boat started to struggle to stay on plane, and we decided to pull in about 12 miles short of our goal.
Our journey to Chicago got much shorter today, and the weather forecast the next several days is quite pleasant.

14 August Grand Haven
One brief overnite at Muskegon – delicious thin crust pizza washed down with a single scoop waffle cone,mmmmmm. We berthed next to a 46 ft carver we had seen earlier on our journey. The crew are “Gold Loopers” – designation for completing the loop. They are on their second loop. Nice people and very helpful on advice where to stay etc etc.
The brief trip down to Grand Haven Sunday morning was delightful in two ways. First, the weather was wonderful and there were many boats out on Lake Michigan and second – after yeoman work by Mike on our depth finder, Bob smacked it a few times and it came back to life! So we don’t know exactly what the problem is, but we’ll bring parts back from our Hilton Head storage spot which might be needed if we have another blackout.

We arrived just after noon in Grand Haven, a popular vacation spot in this part of the country. Very extensive beaches along Lake Michigan and a band shell right on the waterfront downtown with nightly live entertainment. The harbor entry to both Grand Haven and Muskegon is a relatively narrow channel that all boats must traverse.   As a result it is often crowded and there were more than 100 boats per hour going through the Sunday we arrived in Grand Haven.   We grabbed a lunch/dinner combo, walked around a bit, and then back to the boat to undertake some minor surgery on our nagging turbocharger inlet hose leakage. After a bout of cursing and swearing we buttoned her up and we’ll see if our fix is “the bomb”. (Note to readers: this term, “the bomb” is evidently the millennials way of expressing sublime satisfaction with a person, thing, event, etc etc. When I was a millennial, the bomb meant the Atomic Bomb – that is, the end of days, especially if you were on the front line. Soldiers needed to file CBR reports in the event of nuclear attack – “flash to bang time” among others. Just before you liquefy, let us know what’s going on and thanks for your service.)
Back to the present – we finished our evening in Grand Haven watching their nightly summertime fountain water music show. City has been doing this since 1963. Fantastic 20 minute show. 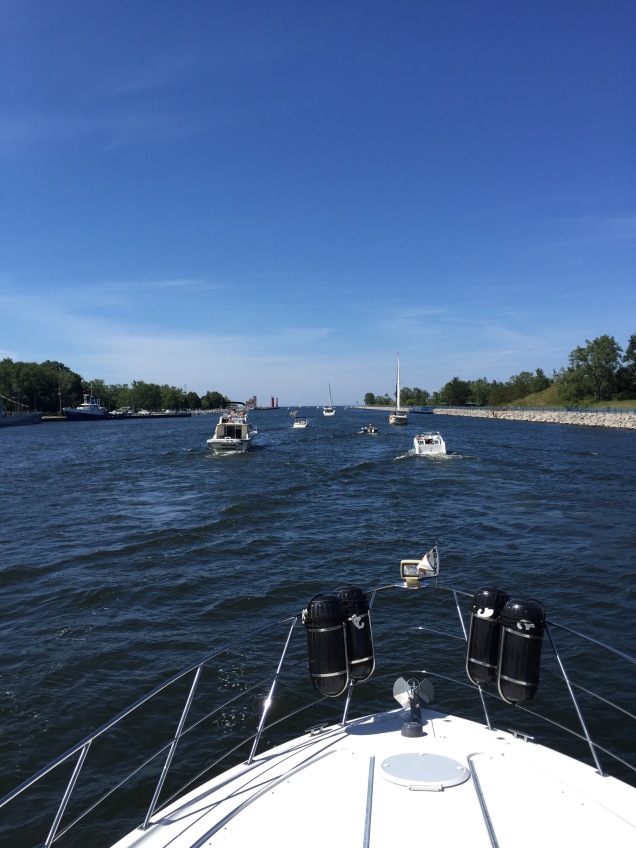 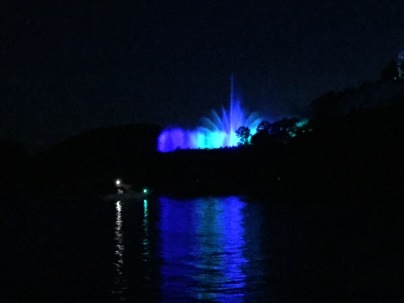 August 15 to Michigan City Indiana
Today a run of about a hundred miles put us in Michigan City Indiana. Evening Star ran smooth as silk in ideal conditions, slightly cloudy so not too much sun, and a nice breeze but not so much as to increase the wave height. It’s a Monday and we saw very few pleasure craft and no commercial vessels. Now that we have navigated south along the entire Eastern Shore of Lake Michigan we can report that we were surprised that there are indeed very high sand dunes along nearly the entire coast. Evidently the wave action on the western shore caused by winds to the west over the lake erode the beaches gradually into sand and then the sand is blown by the wind up into the hills we see today.
The experiment today was to see if we could entice some better mileage from the engines by running at lower RPM / Speed. Normally we are running at 22 to 23 mph at 2500 to 2550 RPM. Today at about 18MPH and 2300 RPM we got no improvement in mpg.
Fueled up the boat when we arrived here in Michigan City for about $2.70 a gallon – gas would have run us about $4.
We’ve rented a car to head west to Grand Rapids tomorrow and pick up Donna. We plan on so we’ll staying at a B&B in Holland MI tomorrow night and return to the boat on Wednesday for the short run Thursday over to Chicago.