June25, 2016 – We made it to Kingston, which is at the end of the Rideau canal system.    The city is comparatively large  with a population of several hundred thousand people.   Downtown there are many “day”cruise ships and lots of little restaurants and shops.    We visited the Maritime Museum there, and it was interesting to see how the St Lawrence Seaway was built (completed in the late 50’s early 60’s), and how it changed the entire region.    Kingston had a pretty large shipbuilding industry and was also a stop on the St Lawrence until the seaway allowed the ships to pass by.     At one time it was the capitol of Canada.   A fellow boater told us the huge Kingston town hall was built to house the Canadian government so when they left the town took it over – biggest town hall ever!

When the industry vanished the town suffered, but at least to our eye, it has recovered and was a nice stop for us.

One special moment for us also happened in Kingston – we were oh so lucky to encounter the prototypical “fast boat” bro’s a few slips down from us.    Imagine  late 30-40 something overweight guys drinking and partying on their luxo speed boat.   By speed ,the 40 ft boat has 4, yes 4, 300hp outboard motors on it, so 1200 hp for a 40 ft  cruising boat.     A bit of overkill I would say, eh?!!!!!   They claimed a speed at 50 mph on the water. If you like loud music late into the night in a marina, these are your boys!

We took a day trip to the Thousand Islands region, which really starts in Kingston and extends for 40 or so miles eastward on the St Lawrence.    There really are at least a thousand islands, many about the size of a typical suburban lot and had a single house on them.     Several are controlled by Parc Canada, so we stopped on one and took a walk about.    Super walker Scott and runner Bob easily hiked around, but even bad knee Mike was able to circumnavigate the island on foot – which tells you how small it was!

The water is crystal clear and you can easily see the bottom 20 feet below, although in many places it is much deeper. And at 66 degrees the water is now warm enough to go for a swim. As well, we can don the snorkel gear and take a look at the underside. 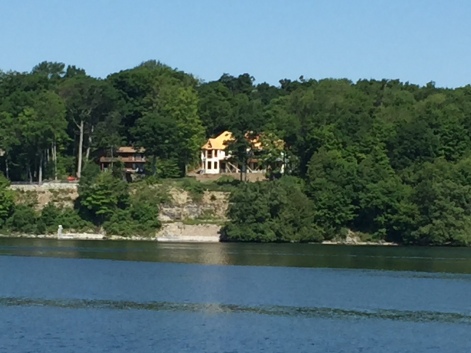 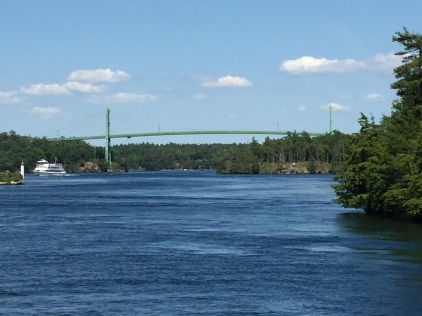 Scott left us the next day to head back to Seattle and the tough job of golfing, traveling, and goofing off in retirement- Bob and I were sad to see “Cookie” go and his culinary skills will be sorely missed!

Next up we travel to Trenton, a city north of Lake Ontario  on the Bay of Quinte, and the start of the Trent Severn waterway.